We conducted a survey of some of the most prestigious academic prizes awarded by professional associations in economics in Australia, Canada, United Kingdom, and the United States and updated it at the end of the project in 2020. The principal source of information was these associations’ websites and the time period covered by this audit was framed by information detailed on the sites. This is not an exhaustive audit of all the awards granted by these associations. We focused on awards that had a research emphasis, covering published books or articles and lifetime awards. Identifying recipients required clarification of some names in university websites and other publications. Two patterns emerge from an analysis of the data: first, women remain significantly under-represented amongst the most prestigious awards in economics well below the share of women in the overall population of the discipline; second, there is some suggestion of gender segregation with women very poorly represented in strong mathematical analysis such as econometrics. Further exploration of these patterns could offer some new insights into women’s poor representation in the discipline.

The Economic Society of Australia (ESA) offers five awards at the national level. These are the:

Figure 4. Distribution of ESA awards by gender from establishment of award to 2020

An audit of the recipients of awards granted by the Canadian Economics Association (CEA) highlight the persistent nature of the gender gap across the portfolio of awards. One of its earliest prizes was the Harry Johnson Prize, which has been awarded since 1977 to the best paper published in the Canadian Journal of Economics. While over 70 authors have been awarded this prize, women represented a mere 12 per cent of all authors. Since 1994 the Doug Purvis Memorial Prize has acknowledged authors with a significant written contribution to Canadian economic policy. Again, just five of these laureates were women. Women performed relatively poorly in the field of economics statistics. Since 2010 the Mike McCracken Award for Economic Statistics has recognised theoretical and applied contributions to the development or use of economic statistics: it has been awarded to 19 men and 4 women. In the field of economic policy 19 per cent of authors awarded the John Vanderkamp Prize were women. This award celebrates best article in the journal Canadian Public Policy. The John Rae Prize has been awarded to the best research record in the previous five years: 17 economists have been awarded this accolade since 1994, just two of them women.

Women appear to be performing relatively better in the award that celebrates the contribution of young economists. Awarded since 2003, the Robert Mundell Prize recognizes the best contribution of a young author in the Canadian Journal of Economics. A total of 21 young economists have been acknowledged with this prize, of which 43 per cent were women, including the inaugural winner.

The Canadian Women Economists Network has established two awards to recognise women: the CWEC/CFÉC Young Researcher Prize, which has been awarded five times since 2010 to a junior woman economist; and the CWEC/CFÉC Sylvia Ostry Award for an economist who has furthered the status of women in the economics profession, through example, achievements, increasing our understanding of how women can advance in the economics profession, or mentoring other, which has also been awarded five times since 2010.

Figure 2. Distribution of CEA awards and honours by gender, 2020 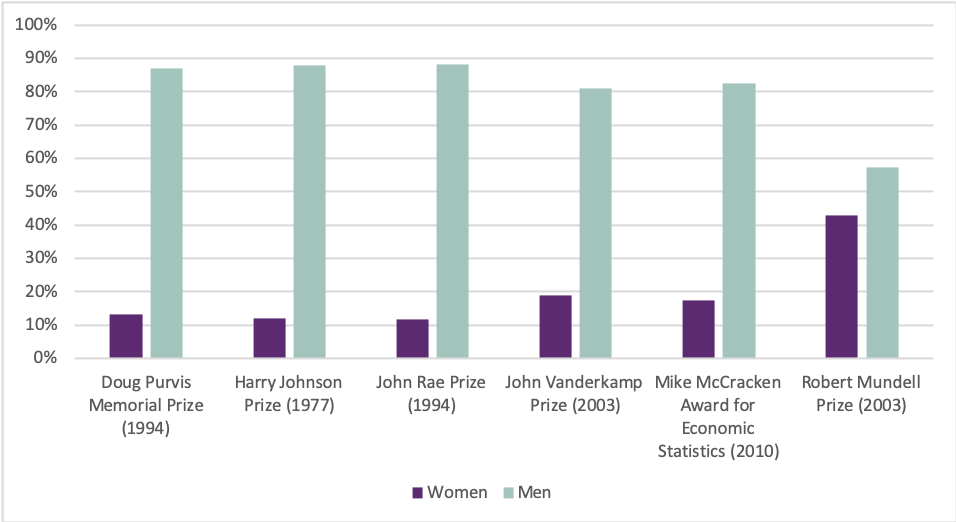 The Economic Journal and the Econometrics Journal in the United Kingdom award various prizes. An audit of recipients provides an insight into the status of women in the discipline, confirming that women economists remain at the margins of the discipline. In 1990 the Royal Economic Society prize was introduced to celebrate the best non-solicited article published in the Economics Journal. Since 1996 this prize has been awarded annually, and while over 40 authors have been awarded this prize, only two laureates was a woman. There has also been some important attention given to encouraging young economists. In 2007 the Austin Robinson Memorial Prize was launched to recognize the best non-solicited contribution to the Economic Journal by an author who has completed their PhD in the five years prior. All but two of the 18 economists that have been awarded this accolade have been men: women were honoured in 2018 and 2019. Since 2012 the Denis Sargan Econometrics Prize has recognised the best un-solicited contribution in the Econometrics Journal from an author within five years of being awarded their doctorate. Six male economists have won the award to date. Another important award is the Wiley Prize, launched by the British Academy and Wiley Blackwell to acknowledge academic excellence of young researchers in the field of economics. Five economists have been awarded this honour, all of them men.

The Economic Journal recognises the contribution of referees, with editors distinguishing up to 14 winners a year for a Referee Prize. Since 2010 over 90 referees have been recognized, of whom 21 per cent were women. It suggests that while women have been under-represented in some of the highest honours attributed in the discipline in the United Kingdom, they are better recognized for the background work critical to this discipline. These results however continue to lag behind patterns in women’s representation in editorial and academic positions. 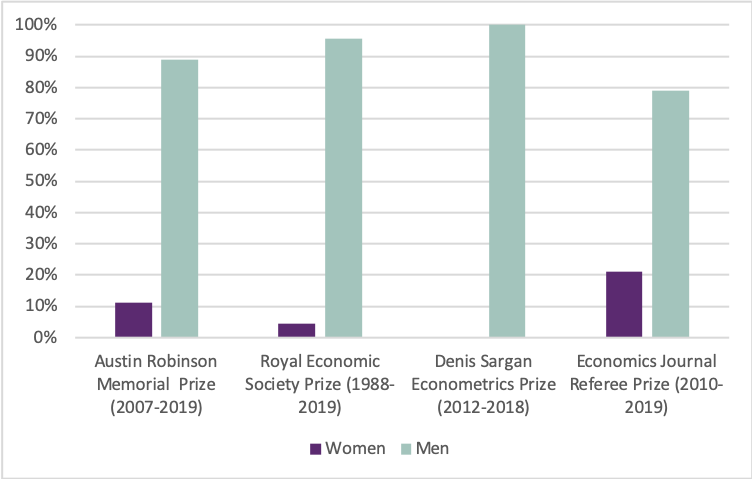 Since 1998 the Royal Economic Society Women’s Committee has been monitoring the gender composition of editorial journals. The most recent report found some encouraging signs: the share of female managing editors or co-editors, typically of a professorial rank, was similar to the proportion of women amongst professor ranks (Mumford, 2016). By 2016 the number of women in editorial boards had not reached 15 per cent (Mumford, 2016) and had failed to follow progress on the relative numbers of female readers and senior lecturers, which is estimated by Mitka, Mumford and Setchel (2014) to be around 27 per cent. The Women’s Committee has drawn on these audits to engage managing editors in a discussion about women’s poor representation in editing positions. While one general justification has not yet been established, weak ‘networking’ and ‘exposure’ have been identified as particular handicaps to getting more women engaged in editorial boards. One of the strategies the Women’s Committee has deployed to address this issue was to develop a list of the female professors in economics and e-mail it to the editorial team of key journals (see Mumford, 2016).

The American Economic Association oversees several distinguished awards and honours covering research and lifetime contributions to the profession. An audit of the recipients of honours that celebrate academic achievement shows that women remain at the margins of the discipline and almost invisible in the most prestigious accolades. Significantly their share of these accolades is well below the estimated 23.5 per cent of tenured and tenure-track faculty in economics being women (see Bayer & Rouse, 2016, p. 222).

One of the oldest distinctions granted by the AEA is the Award of Distinguished Fellow, which recognizes a lifetime of research contributions. Since 1965 a mere 7 per cent of all recipients have been women. While in close to two decades there has been an increase of women prize winners, this increase was only slim. Between 2000 and 2020 women represented just 10 per cent of all recipients. The prestigious Richard T. Ely lecture is part of the AEA annual meeting. Only 9 per cent of all lecturers were women. Just five women have been awarded the John Bates Clark Medal since it was established in 1947 to recognise the scholarly contribution of young economists under the age of 40. The first women to be awarded the John Bates Clark Medal was Susan Athey in 2007. Women performed relatively better in the awards for the best article in the American Economic Journal since 2011, with women representing 23 per cent of all recipients. This is significant given the importance of publishing to the academic prospects of the women.

These results highlight women’s under-representation in the discipline (see Bayer & Rouse, 2016). Part of the problem is that women publish less than men, particularly in non-top-10 journals, with the lack of resources and mentors providing some explanations for these patterns. Notwithstanding these findings, research suggests that women have more citations per publication in part explained by access to professional networks (see Ginther & Kahn, 2004). The picture however is significantly more complex as documented by growing interest in demand-side factors for women’s poor representation in economics (see Bayer & Rouse, 2016). These investigations have for example, found implicit bias in the way women’s contributions are seen by other economists with women being penalised for co-authoring in the context of prospects for tenure. This pattern is more pronounced when those co-authors are men. For men however, an additional co-authored paper has a similar effect to a solo-authored paper to their prospects of tenure (Sarsons, 2015). How these patterns of implicit bias play out in constructions of what makes up for excellence needs further investigation.

Figure 1. Distribution of AEA awards and honours by gender, 2020

An important professional platform for women in economics has been the Committee on the Status of Women in the Economics Profession. This committee has supported the establishment of three awards to acknowledge women’s contribution to the economics discipline. The Carolyn Shaw Bell award recognizes women that have contributed to promote the status of women in the discipline, including by providing mentoring and research on women’s contribution to economics: 24women economists have received this award since 1998. Prominent recipients of this award include feminist economists such as Marianne Ferber and Barbara Bergman, who have played leading roles in the International Association for Feminist Economics (IAFFE). The Elaine Bennett Research Prize has been awarded to outstanding contributions by young women in the economics profession: 10 women economists have been awarded this prize since 1998. Another important feature of the awards supported by the Committee is the recognition of the labouring work around mentoring and supporting other women in the profession. Since 2010, three economists have been the recipients of the Margaret deVries Memorial Fund award for their dedication to mentoring women in the economics profession.

Amanda Bayer and Cecilia Elena Rouse, (2016). Diversity in the economics profession: A new attack on an old problem. Journal of Economic Perspectives, 30(4), 221-242.

Karen Mumford, (2016). On gender, research discipline and being an economics journal editor in the UK. Royal Economic Society Newsletter, April 2016.