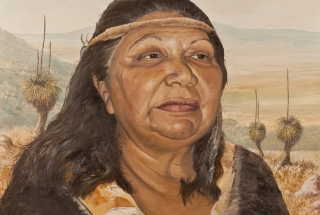 The life of Ngambri, Ngunnawal, Wiradjuri, Matilda House-Williams, well reflects the simple joys, the importance of family and the struggles of an Aboriginal woman born in the 1940s and growing up in white Australia. On 12 February 2008, Matilda House-Williams, as Ngambri elder, offered a “Welcome to Country” at the opening of Parliament, the 42nd, the first Indigenous Australian so invited.

Matilda House was born on an Aboriginal reserve on the fringe of Cowra, NSW. One of ten children, she was sent to her grandfather’s house on the Hollywood Aboriginal Reserve in the Yass precincts. The reserve was dismantled in 1959 and she was returned to her parents and Cowra. Matilda was strong-willed, a trait not well received in mainstream Australian society when exhibited by an Aboriginal girl. Matilda became increasingly rebellious, refused to defer to white authority and aged 12, was sent to the infamous Parramatta Girls Home. Matilda has spent her life endeavouring to improve the quality of life for Aboriginal Australians. As Ngambri elder Matilda takes her responsibilities seriously. She advocates reconciliation rather than alienation, education and unity – with a confidence borne from truly knowing who she is and being comfortable with that. Her immediate family and the extended family of her people is the essence of this life.

This event is supported by the ANU Gender Institute.

Access: Free and open to the Public, no RSVP required.